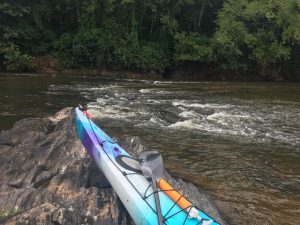 I’ve owned my Dagger Alchemy 14S for a few years and even though it would be unlikely for me to bring it to the coast or lake, it is still my go to river boat and I continue to use (and enjoy) it regularly.

A good metric of how much you enjoy a boat is whether you decide to keep it after upgrading to a nicer boat and this definitely meets that mark, as I have no plans on selling it.

About the Dagger Alchemy 14

The Dagger Alchemy 14.0S was available from Dagger Kayaks between 2009 and 2017. When it was released they described it in their 2009 catalog as:

Dagger also released a slightly larger version, the Alchemy 14.0L, which they described as having a deeper and wider cockpit, with more foot room for larger paddlers.

When I got my Alchemy, I had been paddling a Necky Manitou 13 for awhile, so going to the Alchemy was a huge upgrade and just like the Manitou, which I reviewed here, when I switched to the Alchemy, it felt like I had switched to a real boat.

One of the cool things about the Alchemy 14S is that it is pretty narrow, especially for a plastic boat, while having a decent amount of rocker, making it quite maneuverable for it’s length. I have had it out surfing at the ocean twice and both times enjoyed how having such a small boat, compared to the more common 16 foot+ sea kayak, made it really easy to get onto, off of, and back on to waves.

Although, it should be noted that the first time I had the boat in surf, both foot pegs snapped off, which led me to find out that there had been a recall for the brand of foot pegs used in a number of 2015 model Dagger/Wilderness Systems/Confluence boats. A quick call with Dagger fixed this and, after letting them know the year of my Alchemy, as I have a 2015 boat, but this happened in 2016, they shipped a new pair of footpegs at no charge.

The Alchemy is long enough to track well and in general is easy to paddle longer distances with. However, paddling it on a three day kayak camping trip near Cape Lookout was what prompted me to get a longer sea kayak. It also has all the basic safety features of a sea kayak, with front/rear sealed bulkheads, 3 hatches, including a day hatch, deck rope, Grab Handles, and deck bungee, as well as a drop down skeg.

Compared to other plastic boats I’ve tried, including the Dagger Stratos and P&H Delphin, the plastic in the Alchemy seems a bit thicker and sturdier, closer to the thickness you would find in a whitewater boat.

While the Alchemy handles well and is reasonably efficient to paddle, with the rocker and short length, it gets tossed around pretty easily. So, it is more work and less efficient compared to a more traditional(longer) sea kayak, which is to be expected. When you are doing a 15 or 20 mile day(and especially in moderately rough water,) this deficiency becomes more obvious and it looses some appeal compared to a longer sea kayak in this regard.

How I use the Alchemy

As it is now, this is my go to river boat.

I love how maneuverable it is, while still being quite efficient when putting in some upstream or downstream river miles. The boat is easy and fun to roll as well. I enjoy taking it to the Dam at Falls Lake and run rapids in it. I’ve only had it on the Cape Fear once, when I went upstream from Lillington to Laneir Falls, but have had it on the Neuse quite frequently, as well as a bit of playing with it at Weldon.

I haven’t been using it as frequently and am usually more inclined to head to the lake if I want to get in a paddle, but to be fair, we’ve had a very dry summer and winter and since the rain picked up a few months ago, I’ve gotten back to using it more frequently.

While I still use and greatly enjoy this boat, it has had a couple issues. The biggest one was, of course, when both the footpegs snapped while doing a surf launch the first time the boat was taken surfing, which is described above.

However, another issue I’ve run into is with a support beam that, from reviewing their old catalogs, appears to have been added in 2010, the year after it was released. Something similar can be seen in several of their current boats as well, like the Dagger Stratos and provides some measure of structural support/rigidity to the boat.

You can see the black bar that was added to the 2010 model, highlighted in blue, below:

Towards the rear bulkhead, the seat holds the support beam in place. However, in the front of the kayak, it is held in place by a large block of foam, which is glued to the bulkhead and cut so as to be tight against the top and bottom of the boat. Since the foam runs the full height of the boat, the foam also provides some additional support, along with a bit of extra buoyancy.

What I have found is that over time, as your feet hit the foam in the back and the plastic support, which sticks up a little bit along the length of the kayak, it works the glue holding the foam in place loose. When this happens, both the foam block and front half of the black plastic beam move freely inside the cockpit. You can jam the foam back in place and it will stay for awhile without re-gluing, but will work itself free again, especially if you end up with a boat full of water.

If the boat is not full of water and the foam works itself free, it is more of an inconvenience, but when it is full of water, you end up with two large objects(the foam and the front end of the support beam) flopping around by your feet.

This first happened to me at the pool, where, to be fair, I have put in a lot of time practicing rolls, re-entry and rolls, and other things that result in a full boat of water. So, I’m sure I’ve kicked the foam and generally put more pressure on the black bar than most. However, I would be surprised if it didn’t happen eventually to most people who use the boat more than recreationally, as your feet will inevitably hit the black support bar while paddling, slightly jarring it left or right each time.

As an aside, while playing at Falls Dam, a buddy essentially wrapped his 2009 Alchemy, which doesn’t have the extra support bar in it, around a bridge piling with a decent bit of water force. The boat took it like a champ and there didn’t appear to be any damage once he pried it off there.

My initial thought the first time it came loose was to just remove both the foam and the support, especially as my friends older model doesn’t have it and seems to be fine. If the foam were to come loose while you were at the ocean in conditions, for example, it could be dangerous(or at least result in a swim.) And since it is glued to the bulkhead, every time it comes loose there is risk of damage to the front bulkhead. However, I’m sure they added that in there for a reason and so have been hesitant to remove it.

When my friend bought a Dagger Stratos last year, I noticed that the foam was secured through the top of the boat using a screw, so it appears this is an issue that they were aware of and improved upon their design.

Despite the couple issues I’ve had with this boat, I still really like it and when the opportunity arises, like a dam release or some rain, I make a point to try to hit the river with it. When I first got it, it felt much more like a real kayak than anything I had paddled and even though it isn’t my first choice for the lake or ocean, I love it as a river boat.

I would recommended it as a good boat, especially as far as plastic boats go. However, if you were interested in distance or ocean paddling, but still wanting a plastic boat, it would not be my first choice. After my week in Baja, a P&H Delphin seems like a much better buy for that purpose.

A Few of the Places I’ve Been

Below is a gallery of a few of the places I’ve been in my Dagger Alchemy: