The Roanoke River offers a lot of enjoyment(boating/fishing/camping) to people in Virginia and North Carolina. Coming from Raleigh, Roanoke Rapids is a great starting point, as is only around 1.5 to 2 hours away and just prior to the town, the river is dammed to form a small lake.

From Roanoke Rapids, which is a small town of around 16K, it is a relatively easy shot to the coast, where about 130 miles will put you coming into the Albemarle sound. Most of this is flat water, although there is one fairly awesome rapid a few miles down stream near the town of Weldon. There are a few Wildlife accesses along the way, although they are spread out, especially as you get closer to the coast.

The Edwards Ferry run is a wild life access point near highway 561/258 about 34 miles from Roanoke Rapids. Past that, there are a smattering of roads and bridges, but the next city is around 60 miles downstream near the Roanoke River National Wildlife Refuge.

One of the neatest things about the Roanoke River compared to the Neuse is how much cleaner and clearer the water is. Some(most?) of the cleaner part can likely be attributed to the smaller population around the river, when compared to the Neuse. The Neuse flows directly through Raleigh, the capital of North Carolina and a number of smaller, but also populous areas.

The Roanoke river is much more rural in comparison, with lots of farm land, a couple prisons, and some small eastern North Carolina towns, which judging by the number of closed businesses seem to be struggling. There is a lot of farm runoff, so this certainly has some impact on the water quality. It was neat to get to drive through some of these areas, where farming is one of the biggest parts of the economy.

The actual run from Highway 48 in Roanoke Rapids to Highway 561/258 @Edwards Ferry Scotland Neck, is pretty easy. Most of the rapids happen in Weldon near Highway 301 and 158, which is only a few miles down from Roanoke Rapids. After that, the river widens and deepens and is fairly straight, surrounded by rural farmland.

During the first stretch, the river branches out a bit, which offers a lot of opportunity for exploring. The water is crystal clear and the banks rocky, which makes it a beautiful river to explore. When the river is flowing fast enough, like after a rain or when they are letting water out of the dam, there are a number of places that look like they would turn into some nice rapids.

Near the town of Weldon, there is a very nice rocky outcropping that has a fairly gnarley rapid. There are a few paths down and a rocky outcropping that makes it easy to port around. So, you could put in at the boat ramp in Weldon and make a day(s) of just exploring that section of rapids. The river splits here as well, with a longer, but less extreme set of rapids down the left. While not terribly insane, the water is really flowing here and there are several significant waves, rocks, and rapids, so make sure you get out and scout here!

Past Weldon, the river widens and deepens, and more flat water like. The banks are muddy and there are fewer rocks, but it is really easy going. There are some ramps and homes, but it becomes very rural and much of the river is surrounded by farm land. 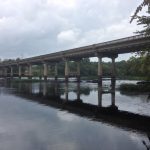 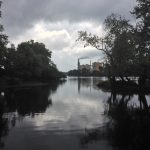 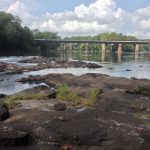 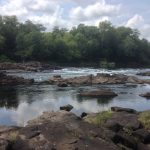 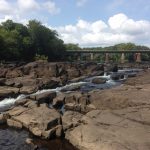 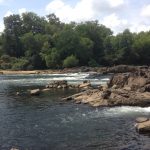 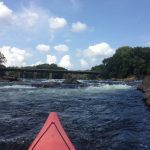 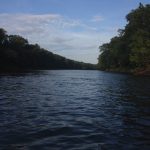