I participated in a whitewater skills class this month with Larry Ausley, an L5 ACA Whitewater instructor with an insane amount of knowledge, and Wayne Jones, who is an exceptional paddler, ACA Instructor, and also an awesome paddling resource.

We went down the Balcony Falls section of the James River in Glasgow Virginia and worked on some basic whitewater skills, such as eddy turns, peal outs, river reading, boat handling, and other skills. As is always the case with these sorts of classes, or even just paddling with people that are more skilled than you, I learned a ton just by watching and absorbing how Larry and Wayne worked with the river, not to mention the concepts they taught as part of the class and the one-on one suggestions for things that I need to work on or tips for improving my techniques.

For me, one of the biggest things I learned was the proper edging when getting into and out of an eddy. While I have some whitewater experience, it is mostly in longer boats and all self taught. So the knowledge and tips that Larry and Wayne provided went a long way to helping me understand the dynamics of the river and the differences between whitewater and ocean kayaking.

The run itself was also quite fun as well. Even though the James river was not flowing at an optimal rate, only around 2.2ft, there were still plenty of places where we could practice the skills Wayne and Larry were teaching. I caught as many eddies as I could and overall am much more comforatble in my boat.

For the class, I borrowed a pretty old Pyranha Inazone 240, as my other whitewater boat(a LiquidLogic Flying Squirrel) is both too big for me and a creeker, so I felt that it wouldn’t offer as much of an opportunity for leveling up my skills. This is because the Flying Squirrel is basically designed for bombing down rapids and incredibly forgiving, while the Inazone has much harder chines and requires a lot more skills/work to manage. This ended up being an excellent choice and I think I will buy it from my friend.

I am now even more motivated to get out there on the river, learn more, and spend some time on whitewater. 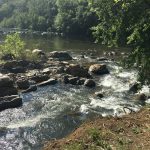 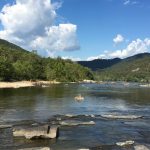 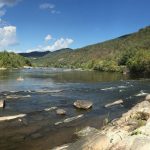 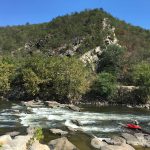 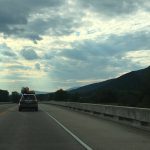