Disclaimer: Please use caution when paddling in moving water, including using all safety gear like helmet, PFD, etc. The below is not meant to be a guide or guarantee of any sort, but merely my observations and how they pertain to my perceived paddling skill.

With the removal of the Milburnie Dam, there are now at least 2.5 nice park and play areas on the Neuse. Milburnie is, of course, one, with Falls Dam and Gunnison Rapid by Pool Road, which is the .5, as you have to paddle about 1/2 a mile to get to it, making up the other 1.5.

While I think Falls Dam has more to offer and so, as a result, would be more likely to go there than Milburnie Falls, Milburnie is a pretty neat spot and I have gone out there a number of times now for a quick hour or so morning paddle. One advantage Milburnie has over Falls is that while Falls is dam controlled 100%, Milburnie gets a bump whenever it rains, so is more likely to be a viable play spot when they are not doing a release. It is also pretty convenient to me and cuts my driving down significantly, which can be nice for a morning paddle.

Since it’s removal, I have been working with another local paddler to try to determine a good way to gauge the flow here and have an idea of when it would be fun to go out there, because when there isn’t a lot of water, the Milburnie rapid is not runnable…or at least not a great deal of fun and enough to make me want to go there, as opposed to one of my other normal runs.

Why Accurately Gauging the Water Level at Milburnie Falls is Difficult

The main thing that makes determining the water level at Milburnie difficult is that unlike other areas, there isn’t a good USGS(or other) gauge for this section of the Neuse river.

About 14 miles North, you have Falls Dam, which is only really useful when they are releasing water from Falls Lake. At any other time, they keep water levels relatively consistent, usually around 150 CFS, although due to drought and other issues it was around 80 CFS for much of last year. So, when they are not releasing water from the Dam, this gauge only really sets a baseline for the river and doesn’t take into account other factors, like rain and runoff.

Further downstream, there is the Clayton Gauge, which is actually a pretty good metric for knowing what the Neuse river is doing. Generally, when they are releasing at 150 CFS and there isn’t any rainfall, you can expect the Clayton Gauge to read about 300-350 CFS.

However, it is about 25 miles or so from Falls Lake and about 14 Miles from the dam, so when water events happen, including both dam releases and rain, it takes a while for this gauge to register an uptick in water levels.

To further compound the issue, Crabtree Creek is downstream of Milburnie, but upstream of the Clayton Gauge. So, any uptick you see at the Clayton Gauge is in part due to Crabtree Creek. Crabtree Creek flows through Raleigh and is usually a trickle, but picks up quickly when it rains. When paddling upstream from Poole road, it is almost always like going from moving water to flat when you cross the point where Crabtree Creek joins the Neuse, so this has a rather significant impact on lower Neuse water levels.

So, unlike other rivers, where you can simply check a gauge and see what the river is doing, it is often not possible to do it for this stretch of river. 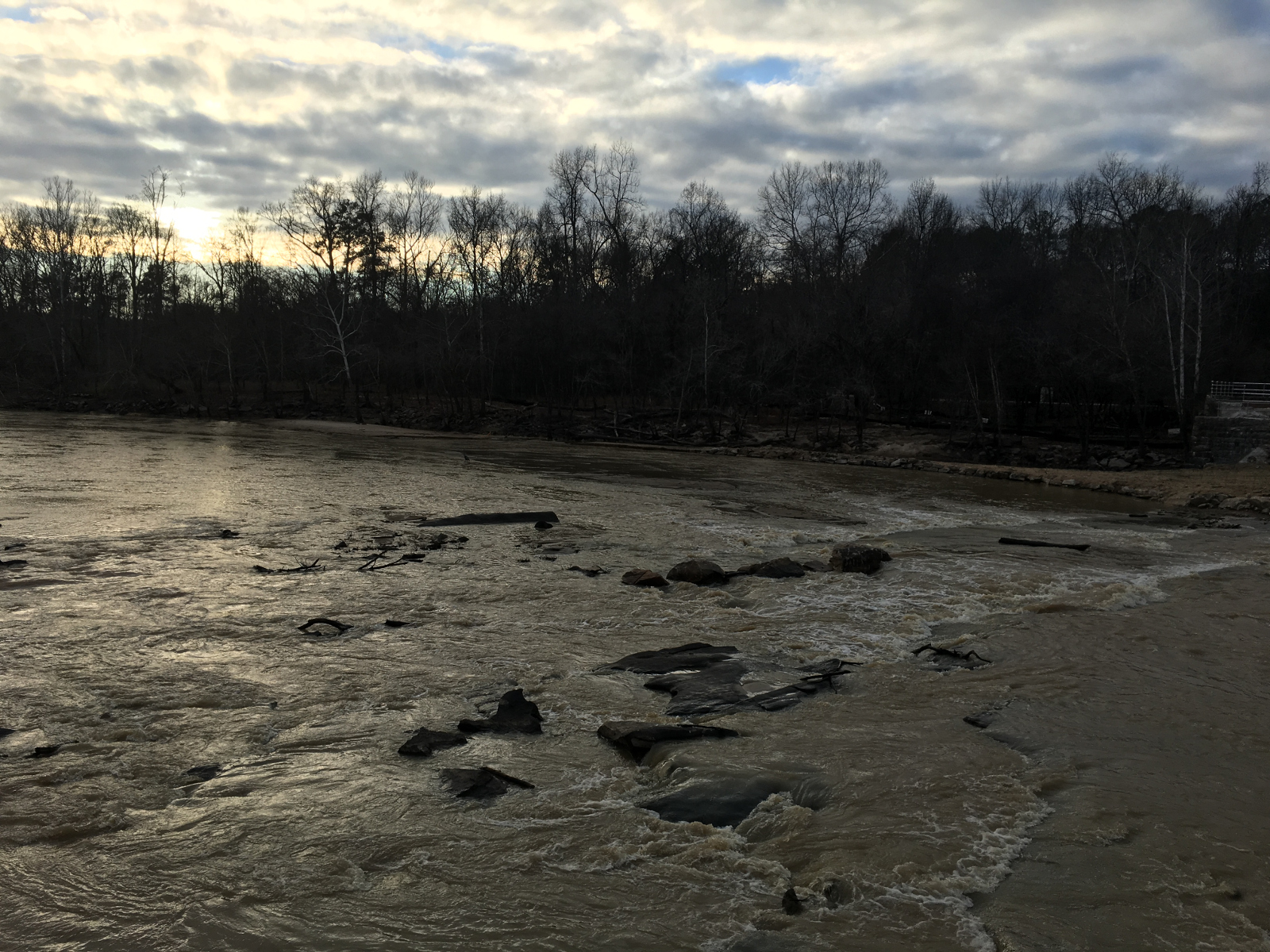 Since there isn’t a straightforward gauge for Milburnie, one way that we have come up with is to keep an eye on rainfall. What we have discovered, a large part through the analytical work of another local paddler, is that when you see at least a 1/2 inch of rainfall register to the precipitation gauge of either Falls Lake or Marsh Creek, the river will see a noticeable uptick and generally Milburnie is likely paddlable.

We’ve not worked out the timing quite yet, mostly due to needing to spend some time reviewing data, but it is a pretty safe bet that the river will be runnable after that. And larger rain events will have a significant and prolonged effect on this section of river.

In addition to using guages, it is necessary to combine it with visual cues, so by observing the river at various levels, I feel pretty good about being able to determine if it is runnable. Currently, there is a web cam available, so you don’t actually have to drive out there to check out water levels, which can be found here.

While we have had a very dry winter and summer, the drought did finally break and Falls lake got back to a healthy water level. What that means is that The Army Corps of Engineers, who controls the Dam releases at Falls Lake, have begun releasing water again from the Dam. Over the past month, we have had several prolonged releases of various sizes, ranging from over 3000 CFS, down to about 500 CFS.

As a result, I’ve been able to compare my personal observations with a known discharge rate and so been able to get a better idea of what rain is probably doing and what level the river is probably flowing at.

This is due to change, but I would say that generally, the 1/2 rain metric we came up with, which is sort of at least in a low-runnable rate, probably puts the river at around 500-1000 CFS. By the time the river is running at around 1200 CFS – 1600 CFS, most of the features will wash out, specifically the rocks in the middle of the Milburnie Rapids. At this time, there are still some cool waves and it is fun to play, as well as being able to go pretty far up the rapid without having to portage. However, when it gets too much above that, it just becomes fast moving water.

By the time it gets to the 3000-4000 CFS range, there is still bumpy water, but that is about it. I’ve not been out there when it is like that, but I think it would still be good ferry practice, as the river is wide enough that the edges are moving much slower, but much like Falls Dam, it gets to a point where it is much less attractive at that rate.