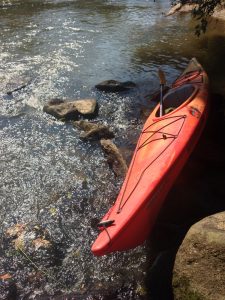 The Necky Manitou 13 is classified by Necky as a day touring boat. I’ve had this boat for several years now and found it to be a fun river boat, as it is short enough to be maneuverable, while being long enough and well shaped, so as to offer reasonably good tracking. The Manitou is quite stable and due to the large cockpit, easy to get into or out of. I will always have a sweet spot for this kayak, but as my skills grew, I reached some of the limits of this boat.

The suggested retail price of these boats is around $1000, but you can typically find them a bit cheaper new, closer to the $750-$900 range. Used, I’ve seen them go from $400-$800, depending on the age/model. While Necky has both a 14 foot version and a 13R(which is a wider model,) I have only seen the 13 and Sport models when browsing used boats on Craigslist.

There are a few versions of the Manitou, but the most common is the 13, which is just under 13 feet long. They also offer a 14 foot model, along with a smaller 11 foot recreational boat called the Manitou Sport. The Manitou is classified as a day touring boat and has a mix of features you would expect from a recreational and touring boat.

On the recreational side, it has a wide cockpit area, around 24 inches(up to 26.5″ on the Sport.) This makes getting into/out of it very easy and also provides a lot of primary stability. On the touring side, it is a bit longer than most recreational boats and the hull is designed so that it tracks well, although there isn’t really any rocker to the hull.

The front bulkhead includes some foam balast, along with your standard adjustable foot pegs. The seat is also adjustable in several ways and most include an indention to hold a small water bottle. There are bungees front and back, along with deck line front and back. A rear hatch provides storage, and there is also room past the footpegs to stow a dry bag when camping.

For it’s width, Rolling the Necky Manitou 13 is relatively easy, although with the wide cockpit and not much in terms of knee braces, you do need to have the foot pedals adjusted properly to keep yourself snug. The foot pegs are also rather small, so it is easy to slip off them.

Differences in Old vs New Models

If you are looking to buy a used Manitou, there are a couple ways you can tell the age of the boat.

Newer models will have a version of Necky’s active comfort seat, while older models have a foam seat that is adjustable, but made of a larger/thicker piece of foam. There have been several iterations of the active comfort seat, so you may want to consult their site for the most recent version and compare it to the boat. A picture of the 2.0 version of this seat is below.

Another way you can tell the age of the boat is the hatch style. Older versions of Necky’s boats use a two part hatch, which has a bottom neoprene cover that goes on like a spray skirt. A plastic cover is then placed over it and secured with plastic clips.

Newer versions switched to a rubber cover, with a cross plastic buckle system. The newer version is a lot easier to get on/off, as it is just a single rubber seal. Unlike other rubber covers, like those found on Dagger kayaks and some sea kayaks, the rubber cover itself can be removed fairly easily. The buckles are what hold it in place, so it really just slides on or off. The newer version has a much higher lip than the old version.

If you have the option, the newer version of the hatch is definitely a better choice, due to how much easier it is to open/close. However, both do a good job of keeping water out, even when doing rolls or having the boat upside down for awhile.

Due to the length of the boat, you probably won’t be able to reach the hatch easily while in the boat. If you have to have someone do it for you, they will likely have trouble putting the old version on, as it takes a bit of practice. So, at least for ease of access while on the water, the new version is hands down a better design. The old version works fine once you get the hang of it, although when it is cold or your hands are tired, it can be a pain. Both are reasonably water resistant hatches.

I used this boat extensively on the river, as well as taking it out on the lake a few times. I’ve took it down a number of rapids, including a few pretty big Class III(possibly a IV.) I’ve also scratched it up a few times doing so, but never had any major issues.

It is quite maneuverable and I had no trouble going down class 1-3 rapids. Although it is a long boat and requires some thought when approaching a line of rapids, with some practice it is quite easy to turn. I’ve found that it tracks well and preforms well when playing in small waves and ferrying across rapids. Of course, since it is a longer boat you do want to plan your route as much as possible when going down a series of rapids.

It has ample storage space and I have taken it on several longer(40 mile+) overnight kayak trips.

The Manitou tracks well, is easy to maneuver, and is very stable. I’ve not tipped it over yet, although have seen my friend do it a few times. The cockpit is quite roomy, so there is plenty of room to stow day gear inside and between the rear compartment, in the front area past the foot pegs, and in the rear hatch, so there is plenty of room for camping. When you want to stretch out or take a break from paddling, the wide cockpit gives you plenty of room to stretch your legs without getting into the boat.

Even though it is rather wide, it still feels like a proper kayak and if you adjust the seat and foot pegs properly, you can do some more advanced paddling techniques.

It is comfortable paddling long distances in and tracks well. I easily maxed out the hull speed in it, which I believe is around 5MPH.

One thing that makes it a great river boat is how easy it is to get into and out of. Here, the over all width can be nice because you really don’t have to do any work to get into it. It is also light enough to carry(although see the below section for some carrying issues.)

It also sits high enough and is wide enough, that you really don’t need a skirt for normal paddling, unless you are planning on going down some rapids.

Some of the things that make this a great boat are also a bit of a downside when you want to start doing some advanced kayaking, primarily the overall width of the boat. The boat and cockpit are quite wide, so rolling is a bit harder than a smaller boat, as is proper edging. At least with the older models(and I believe newer ones) the thigh braces leave something to be desired, further making advanced techniques more difficult.

It is also a relatively thin boat, so the hull has a bit more give than other similar style boats, especially older models. So, it bends easily.

Due to the sharp edge of the cockpit, it can also be painful to carry on your shoulder. I usually use a folded up towel held in place with a backpack, otherwise the edge would get painful when carrying for any extended period.

Overall, I really enjoyed this boat and space permitting, do not plan on getting rid of it, despite having upgraded to a longer narrower boat. I think it is an excellent introductory kayak, as it offers a very good mix of touring vs rec boat properties. Primarily, the Manitou is stable enough that you don’t have to worry about tipping over, while still tracking well, allowing for a roll, and generally being a pleasure to use.

Ultimately, my reason for getting a new boat was I that as my skills grew, I wanted something that I could grow into and take in the ocean, edge, roll, and was more kayaking and less recboaty.

Despite that, I have no regrets about owning it and happily paddled it for several years. It definitely gets my recommendation as a nice hybrid day touring boat!