This year, I had the opportunity to spend a week in Baja California, Mexico paddling and exploring the coast line. This was without a doubt the most amazing and beautiful place I have ever paddled(so far.) The trip was organized by an ocean kayaker friend who had went last year and, as is the case with anyone that goes, got hooked by the wonderful and unique paddling experience offered in Mexico.

We started out our trip by flying into San Diego California, where we spent a night walking around the downtown marina area. Since we were loosing 3 hours due to timezone changes, we didn’t want to go to bed early, so walked at least 5 miles the first night exploring the downtown area. However, we still ended up waking up at around 5AM. The next morning, we met up with the rest of our group and were picked up by our guide, Jennifer, who would drive us across the border to Baja California.

The next 6 days were filled with adventure and awesomeness. We paddled every day, ate great food, and even though we paddled in a relatively small area, there was very little overlap between the places we paddled in.

The first day was a relatively short paddle exploring La Bufadora, which is one of the largest blowholes on the American continent. The day we went, the blow hole was particularly active as compared to later in the rip and we got a first hand look at it, as we backed our kayaks into the blow hole. It was also Sunday, so the place was very crowded and we had a ton of on-lookers watching us kayak. 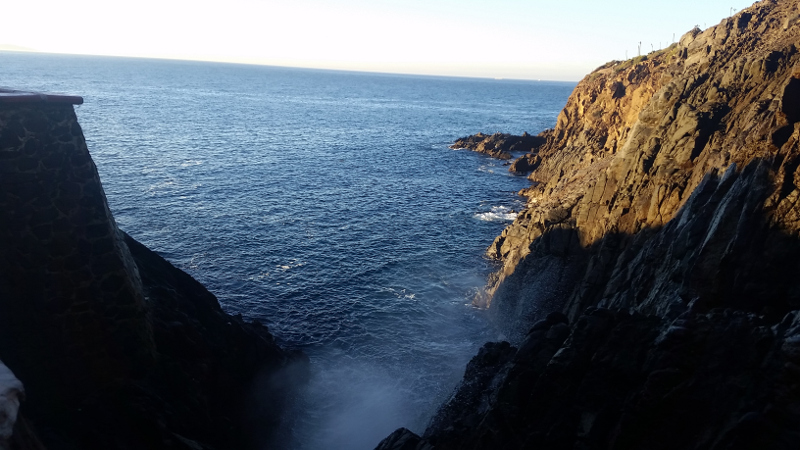 While there are a number of sandy beaches, especially North of where we were towards Ensanda, the area where we paddled was almost all rocky beach. The amazing rocky coastline is one of the things that makes this such a unique paddling experience(especially compared to most places on the East Coast.)

The next day, I got to experience my first pour-over, which is a type of rock gardening where you ride the swell over or between a rocky outcropping, and one of the coolest features of this type of coastline.

It takes some practice to get the timing right and is a bit intimidating at first. However, by the end of the trip I had a pretty good feel for how the timing worked. The swell creates a sucking effect, as it rolls back over the rocks and can create some incredibly steep and powerful holes. However, unlike holes on a river, they reverse and go away relatively quickly as the swell flows back and forth across the rock, so are unlikely to hold you indefinitely(although can still cause a lot of damage.)

There was rather large swell, probably some of the biggest swell I have paddled in, but for the most part it doesn’t break until it gets close to shore. As a result, we did little surfing while we were out there, although on the fourth day I did catch a couple nice rides when we stopped for a few minutes at a place where the waves were breaking mostly perpendicular to the beach.

Another neat experience was paddling in the Slot of Boom, which is a narrow passage(about 20 feet wide) that, due to the way it is lined up with the swell, creates an area where very large(and sometimes a bit confused) waves rush through it. You can point your kayak down the slot and take some pretty large waves across the bow(and face,) or turn around and try to surf one out. 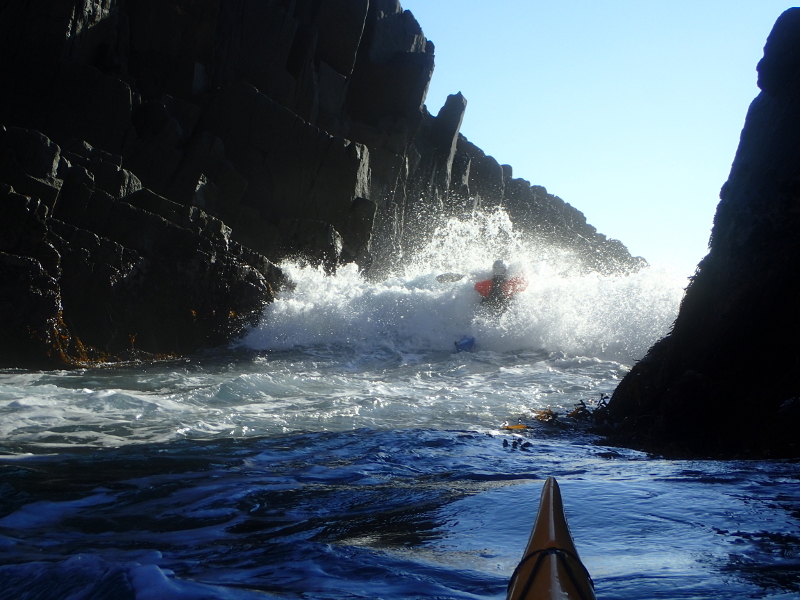 While a lot of our paddling involved playing in the rocks, there were plenty of other amazing places to explore. We paddled in several caves, as well as made 3 mile crossing to an off shore island. On the way over to the island, there was pretty heavy swell and wind, enough that I was glad to be wearing a sea sick patch. However, on the way back, both the wind and swell had died down making it much easier to deal with. 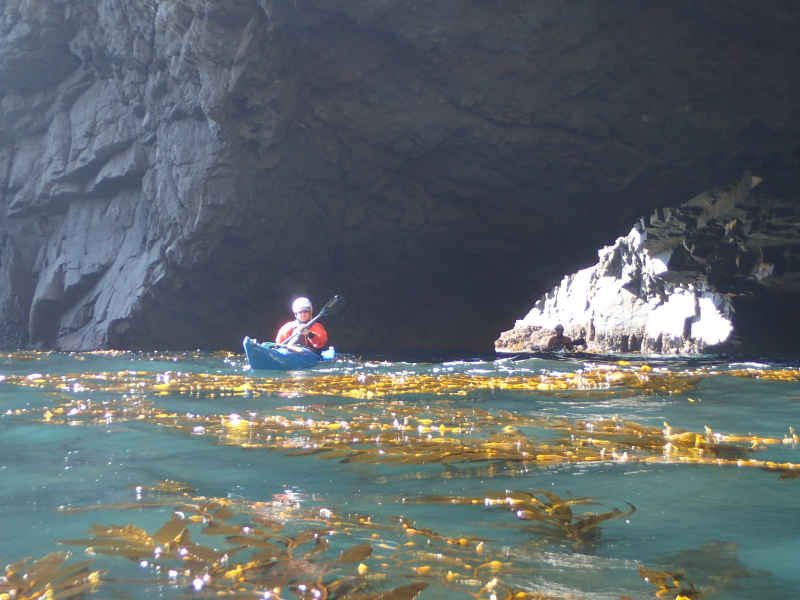 Another neat experience was seeing all the seals. They were everywhere and very curious. In addition to seeing them laying on rocks, it was common to see 5 or 6 of them floating with their heads out of the water watching us whenever we took a break on the beach. 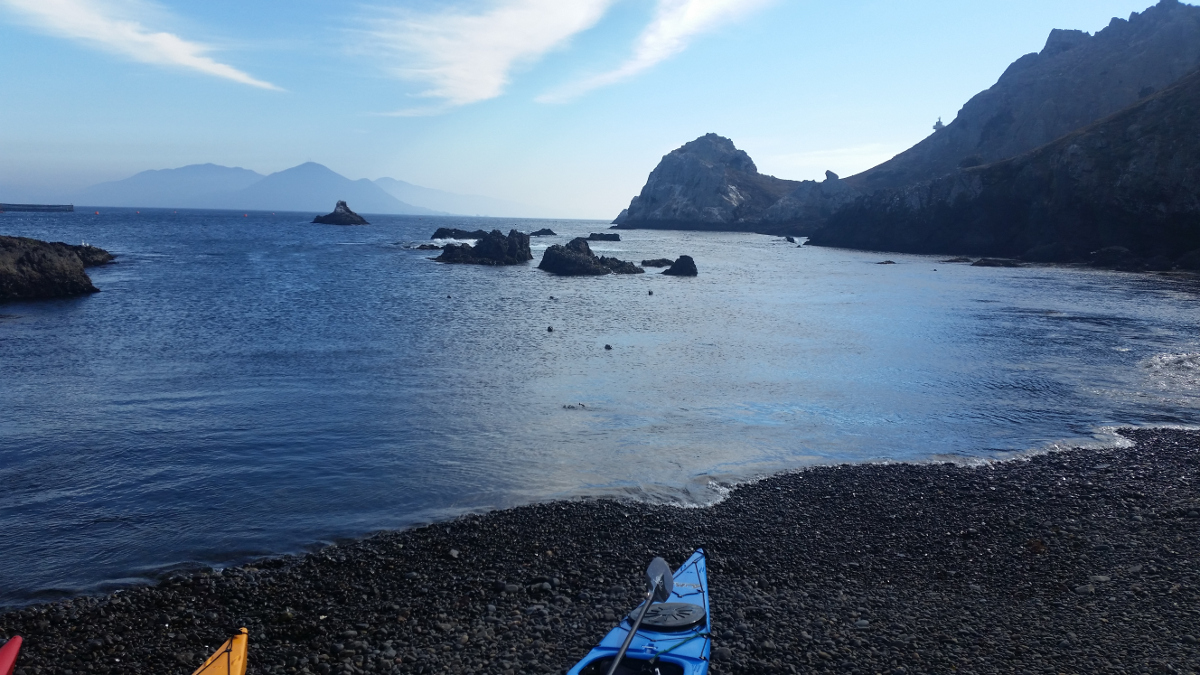 Aside from just good paddling, the food was also amazing. We stopped and had some amazing tacos de pescado and tacos de camerone (fish and shrimp tacos,) as well as some really good ceviche, at some food stands around Ensanda. Our host’s husband was also a great cook, who made ceviche with some fresh fish that we picked up at a local fish market, along with a number of other really yummy dishes. Interestingly, one of the restaurants we stopped at was serving sushi and so on one of the nights, I ate some pretty great sushi too.

This was easily one of the best paddling experiences I have ever had and even though I have just returned, I am already thinking about going back!